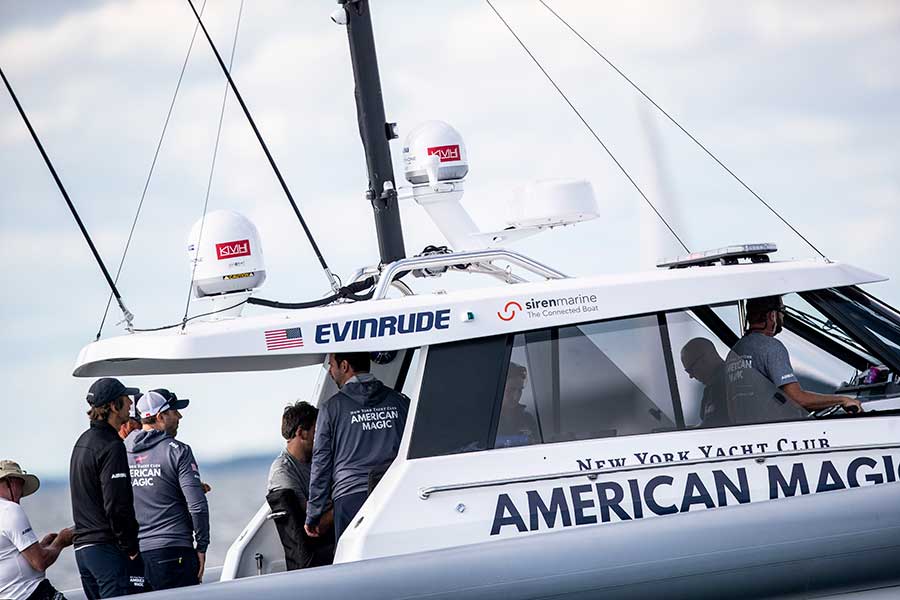 “We are proud to support New York Yacht Club American Magic in its challenge for the America’s Cup,” says Martin Kits van Heyningen, chief executive officer of KVH. “There is special meaning for us since the America’s Cup is part of KVH’s history, with our very first product developed for a 12-meter yacht preparing for the 1980 America’s Cup.”

“We are excited to be working with maritime technology innovator KVH and have their products on our fleet of chase boats,” says Terry Hutchinson, skipper and executive director of American Magic. “The ability to have reliable data transmissions contributes to our competitive edge.”

The connectivity equipment KVH installed on American Magic’s chase boats includes: the TracPhone® LTE-1, an ultra-compact marine-grade system powered by LTE-Advanced network technology providing service as far as 20 miles offshore; and the satellite-based TracPhone V3-HTS providing satellite communications at data speeds of up to 5 Mbps down/2 Mbps up. The V3-HTS is designed for KVH’s mini-VSAT BroadbandSM HTS network, which utilizes Intelsat’s FlexMaritime service to deliver global multi-layered satellite coverage. The two systems will be configured for least-cost routing, ensuring uninterrupted and cost-effective data delivery via automatic switching between LTE and satellite services.

KVH’s connectivity equipment will be used by American Magic in such training locations as Newport, RI, and Pensacola, FL, and in racing venues that include Cagliari, Italy, on the island of Sardinia, where the first America’s Cup World Series race is scheduled to take place in April 2020. The 36th America’s Cup is scheduled for March 2021 in Auckland, New Zealand.

KVH is also providing American Magic with high-performance FOG-based inertial measurement units (IMUs) that the team will use to measure various performance metrics of the race boats.

The America’s Cup is the highest prize in sailing and the oldest trophy in international sports. American Magic brings together two highly successful racing programs—Bella Mente Racing and Quantum Racing—and one of the foremost yacht clubs in the world—New York Yacht Club—united to win back the Cup, reconnect the American sailing base with the premier event in the sport, and elevate the quality of competitive sailing in the United States.

KVH’s history with the America’s Cup goes back to 1978, when the syndicate for France III—a 12-meter yacht preparing for the 1980 America’s Cup challenger series in Newport—asked engineer and sailing enthusiast A.H. Kits van Heyningen to develop a yacht racing computer. Four years later, Sailcomp was introduced, giving the marine world its first digital fluxgate compass—and a start for KVH Industries. Over the years, KVH’s inertial sensors have also been part of America’s Cup technology advancements; KVH’s CNS-5000 fiber optic gyro-based navigation system was on board the AC45s and AC72s in the 34th America’s Cup and on board the ACC foiling catamarans of the 35th America’s Cup.

KVH is a mobile tech innovator that provides connectivity solutions for commercial maritime, leisure marine, and land mobile applications on vessels and vehicles, including the award-winning TracPhone and TracVision® product lines, the global mini-VSAT Broadband network, and AgilePlans® Connectivity as a Service (CaaS). A leading innovator for assured navigation and autonomous accuracy using high-performance sensors and integrated inertial systems, KVH’s FOGs and FOG-based IMUs are in use today in a wide variety of applications ranging from optical, antenna, and sensor stabilization systems to mobile mapping solutions and autonomous platforms and cars.

About KVH Industries, Inc.
KVH Industries, Inc., is a global leader in mobile connectivity and inertial navigation systems, innovating to enable a mobile world. A market leader in maritime VSAT, KVH designs, manufactures, and provides connectivity and content services globally. KVH is also a premier manufacturer of high-performance sensors and integrated inertial systems for defense and commercial applications. Founded in 1982, the company is based in Middletown, RI, with research, development, and manufacturing operations in Middletown, RI, and Tinley Park, IL, and more than a dozen offices around the globe.

KVH Industries, Inc. has used, registered, or applied to register its trademarks in the U.S.A. and other countries around the world, including but not limited to the following marks: KVH, TracPhone, mini-VSAT Broadband, TracVision, and AgilePlans. All other trademarks are the property of their respective companies.